I have been repeating this statement over and over on the Cucumber forum, but apparently with no good result. To me this is a simple statement and I fail to understand what’s difficult to understand in its simplicity: Cucumber (JVM, Ruby, C, the flavour doesn’t matter) is not a testing framework.

I’ll try to further explain the statement, not because I believe it needs to be explained, but hoping an explanation will solve doubts. To do that I’ll try to state the facts in way as much practical as I can.

JUnit, TestNG and DBUnit are examples of a testing framework: they provide facilities to put a software in a certain condition, leverage some parts of the software and assert the outcome responds to the expected parameters.

The goal of those frameworks is to provide the tools to achieve the result (testing the software) with the least possible effort and the maximum outcome. As such, they have programming structures for asserting conditions are met, for setting up the test rig and tear down the test rig as well, ensuring the system is always in a clean condition before a new test is run.

Cucumber doesn’t have any of those facilities, simply because it is not a testing framework.

Cucumber is a specifications tool, something completely different. It uses Gherkin (the language) to describe in a natural language the software specifications.

Does anyone of you remember the Use Case Template? 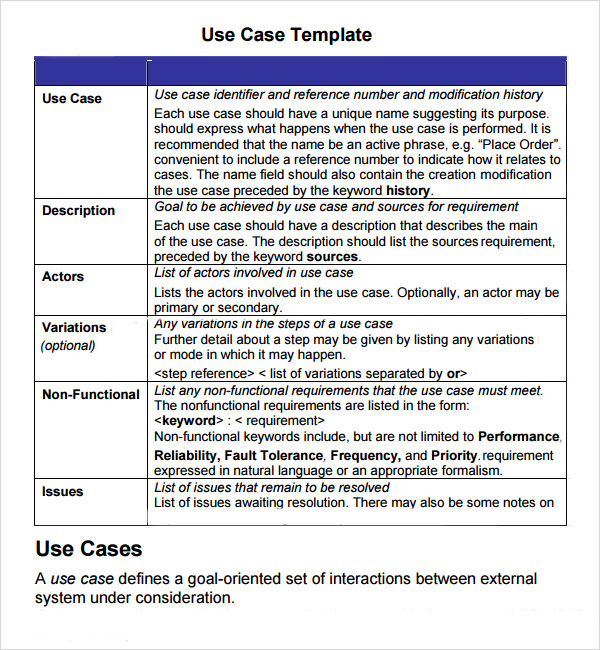 Well a Cucumber feature is much more like one of those than a bunch of tests, would you agree?

There was once a time when we were describing software systems by collecting a few of those use case templates in a Word document, right?

Now, it wasn’t much of a trouble to describe a system like that, at least at first instance, but after a couple of maintenance cycles the above documents were not describing the system any more: I haven’t found one single situation where the above documents were maintained and kept in sync with the implementation. So the system documentation was just obsolete after a few months of operation.

Why was that? Because the cost of maintaining such documentation was not justified by the short term benefit of doing so: why should I spend 30 minutes to find the correct place where to apply the patch in the system documentation if the fix itself costs me 15 minutes?

So, Cucumber steps in and tries to transform the above specifications into something valuable and alive. How?

The specification format (or structure, if you prefer) is almost free, so to leave the writer the freedom to express himself freely. This is even less structured than the template above, but there are good practices telling us how to maximize the result, like providing the list of actors and the general goal at the very beginning.

The file is plain text, so to avoid any requirement on the tool used to open and modify the document and doesn’t add any formatting to avoid reader to be distracted or writer being dragged into endless make it prettier sessions.

A file represents a use case (feature in the Gherkin language), so you end up having multiple files, each one representing a piece of the software. This greatly simplifies version management, collaboration and merging, enabling multiple writers and revisors working on a single system. It’s not uncommon to use the same version control system in use for the system to store the documentation.

Files can be structured in a hierarchical fashion via folder structure, so big systems with lots of features can organize their specifications.

Files can be annotated via tags so to create parallel organizational structures, with the folder structure still being the prominent one: this enables additional categorizations, useful to track other associations between use cases (features), as much as what the introductory Use Case Diagram was doing in the Word document.

What makes the biggest confusion, though, is Gherkin files can be executed.

That is what Cucumber provides: the support software structures and an execution environment for Gherkin files.

How? By mapping each statement in each scenario with some lines of code in the language you like (Ruby? C++? Java? Scala?). If the code ensures somehow the system does what it is expected to do, than the documentation is in sync with the implementation.

Only this last part resembles a test. Only at this stage there is some code involved. And usually testing frameworks and automation libraries are used to do such verification, like JUnit and Selenium.

So, if you need to test your system, please use a testing framework! If, instead, you want to document your system, you are welcome to use Gherkin and Cucumber!

23 thoughts on “Cucumber is NOT a testing framework!”

My Agile and Product board

This is going to be a board where we are going to talk about Agile, Product, Methodologies, etc... on a software basis